Baby Diary: is this real life?

Garrison slept in, and I got up early so that we could make it to our 9:00 appointment with the doctor this morning. It really was the basics, peeing in a cup, filling out paperwork, taking blood, asking questions, giving my insurance card and photo id to everyone like ten times. Having to tell them. "I don't know" whenever they asked how far along I was. (it was asked 4 times) and finally after all the prodding, and poking, and asking, we were told that we would be able to have an ultra sound in an hour after I drank my weight in water so that my bladder was full. (it's necessary to push my uterus up towards the surface of my belly until im "showing" more) so, after a run to sonic to get 3 large drinks for my welcoming bladder since I had JUST emptied it by peeing in a cup... I chugged, and drank, and sipped while we played at the park imaging out little he/she playing with us in a few months. After a while my brain, and then lips, and then upper body froze from the ice water and cream slushies I was drinking, combined with the chilly september air. So we went back to the car and drove to the doctors, with the few minutes left to spare we watched the funniest cat videos on you tube.

Finally, the procrastinating, and drinking, and day dreaming had ended. we signed in and were called back to the very sophisticated and technically advanced room called the "ultra sound room." Yeah. Awesome. If there's ever a moment when you feel cool, it's that one. The moment when your about to see and hear through skin, and organs, and blood and amniotic fluid and look at this tini little thing they call a fetus, and you call your baby. 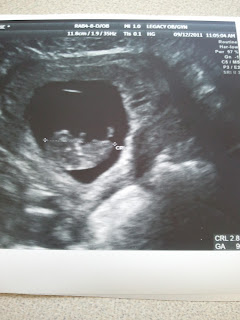 You know that thing you hear in your head after you've run a little too hard, or got a little too mad. It's called a heartbeat. Imagine it pumping twice as fast and sounds strangely like a muffled recording of a galloping horse and you've got it. Proof, that the image your looking at really is alive. Though his/her hands and feet may not be moving much yet, that little heart is working as hard as it can to stay alive so that it can come meet me, Garrison, and this world we call home.

Then, it ended. I seriously could have stayed in that room for hours, days maybe. It was so procedure and usual for the nurse. She was just measuring, and recording and snapping pictures and placing "BABY!!" above some that were for us. and weird numbers and letters on the ones that were for them. But, that experience today that we were able to have was anything but ordinary. She confirmed a hope, a desire, a thought that we had. Maybe there's a baby in here. Maybe we actually do have the ability to create life. Maybe. We peed on a few sticks and they said that we did, but honestly what do sticks know? A few symptoms that could just as easily be caused by bad food? That was my biggest fear, that we would go in there and be all excited and talk about how we think we are pregnant and have it turn out to all be in our heads. But, she, that little nice nurse that was just doing her job, changed our lives. She gave us the proof we cannot deny. The darn sticks were right.

It was just a squirt of some liquid on my slowly growing tummy and .1 seconds later there is a baby on screen. Obviously she's done it a few times from how quickly she knew right where to put it. She knows where my uterus is better than I do! and without warning, the audio turned on, bam. shooshoo shooshoo shooshoo. The heartbeat.


And yeah, I know this shouldn't be such a shock. I had to know that this day would come eventually. But today was just different. It's now undeniable. just. different.