We represent the lollipop guild and welcome you to munchkin land! 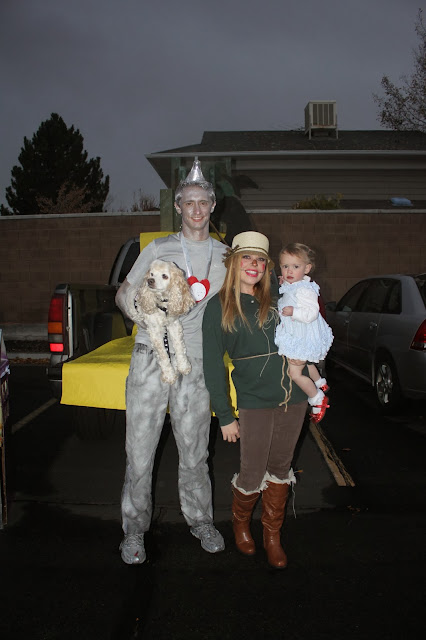 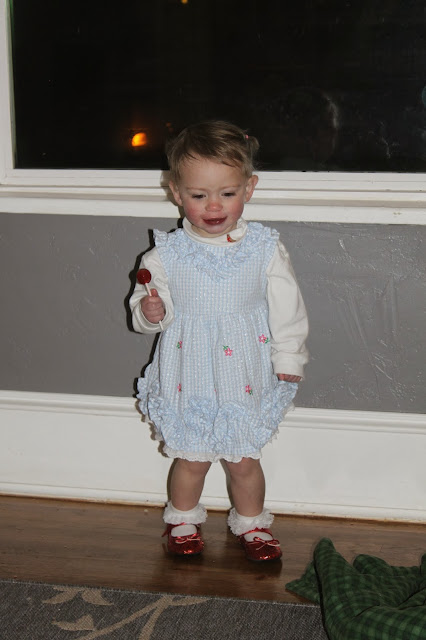 The wizard of oz has always been a favorite of mine, an older friend of mine was Dorothy in the school play when i was younger and because i idolized her, i inevitably idolized the "land of oz" as well. so, when i saw those red ruby slippers on sale at target about a month ago it all came together in my mind. we would dress Bay up as Dorthy,  i would be the scarecrow, Garr could be the tin man, and we would cut baxter's hair to look like the lion. well, after letting it grow out for a few months, we just couldn't get the whole dog/lion concept to work out so we just gave him a normal cut and brought him along as toto.

sans one member of the well known clan we still enjoyed ourselves on the rainy, coldest night of the week at the trunk or treat party. in the ward we all come together to let the kids "trick or treat" from the trunks of our cars, some trunks have fun little games to play and others are just plain ol' spooky. as soon as garrison caught on to the wizard of oz theme he decided to go all out. here's a picture of our truck "trunk" 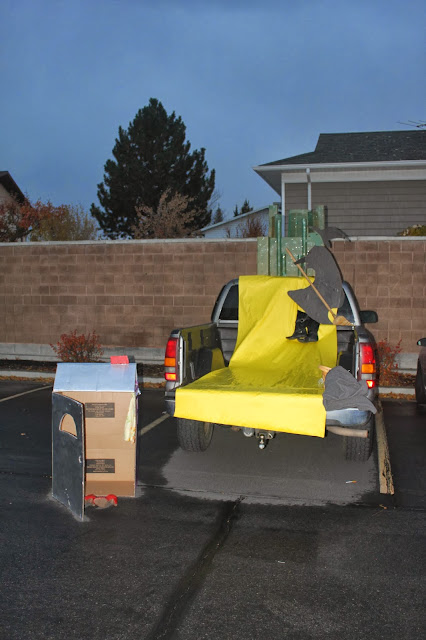 he made the wizard's castle out of shipping material from his work, and the witch was cut out of a piece of cardboard. we made dorothy's house a few weeks ago as a fun play house for bay and last minute decided we could use it as part of the scene squashing the wicked witch and leaving only her socks and some red shoes behind. we gave out lollipops from the "lollipop guild" and the yellow brick road from butcher paper. when night time came, we turned on some flashlights and lit up the wizard's castle which garrison had covered in glitter so it really sparkled.

oh, and garrison's arms were literally spray painted with silver paint, and his face, hair, and neck, with the silver/glitter hairspray stuff. somehow he always gets the uncomfortable costumes.