for the past few weeks (or months depending on which symptom you're talking about) i have just not been feeling the same, i went to the doctor a few months ago to check and see if my thyroid medication was wrong, it wasn't. levels were all normal and healthy. i haven't really been gaining weight but i was just mostly tired and sick feeling. lots of nausea and cold sweats. anyway, in going through my options a few things continued to come up. not eating right, not exercizing enough, starving myself at work, sleeping too much, pregnancy and even depression were options. well, in order to start eliminating options i tried to control my variables and fix whatever was messing me up inside. and granted, you have to understand that i have been taking my birth control like clockwork and haven't missed anything, ever. so pregnancy, although it did answer alot of the symptoms, i truly felt was at the very bottom of the list of "likeliness"

garrison and i have been married for 7 & 1/2 months. we love each other alot and really nothing is wrong, we don't have debt, we have so much fun, we don't argue, we like our house and are enjoying our callings, and everything is just a-o.k. and a baby has been in our discussions. there wasn't really anything keeping us from not having a baby. it would change things obviously, but there wasn't anything we had to fix before a baby would be welcomed in the world and so it was always an option to get pregnant but, mostly i didn't want one. not yet. "let garrison finish school first","i have so much more that i need to do with work, and exercize, and vacations, and hobbies before i start that chapter","we would be the first of our friends to get pregnant, most aren't even married yet!" were some of my excuses. well.... god didn't hear them. 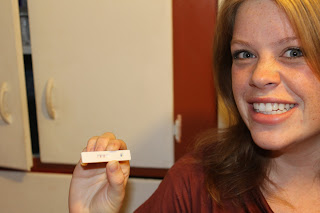 he had a different idea.

when i went into my first appointment with my obgyn for my pre-marital exam i chose birth control because i was already used to taking medication (thyroid) every day at the same time. it was cheap, painless, and best of all had a 99% success rate. the only option that would have worked better was tying my tubes! well, I AM THAT 1%. i am the girl that got pregnant, i am the girl that "beat the odds" i am the girl that besides her best efforts still has a bun in the oven.

garrison and i found this out today (august 25th) four days after my 21st birthday that i am pregnant. 3 pregnancy tests and a few filled cups of pee later, we finally believed what the crosses and lines, and plus signs were telling us. BABY DUE! 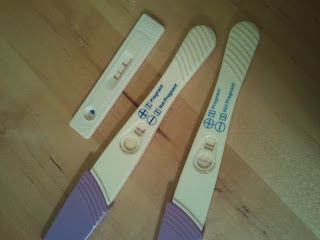 this was a few hours ago when shock hit in, when the next chapter started, when the abrupt, immediate, life-long, heck! eternal change was realized. after a few calculations and figuring out exactly when my last missed period was (yes, i missed a period, but this had happened multiple times before and i wasn't pregnant all those other times!) and we figure we are about 6 weeks along. that means, my baby is about the size of a pumpkin seed, it's head is formed. it has buds for arms and legs, little balls for eyes and ears and.... drumroll please..... it had it's first heart beats.

i personally, besides the usual symptoms i've been dealing with for the last few months do not feel different. now, when i realized that i am pregnant, i have come to understand that i have had my first craving: Costco bread, toasted, with butter and mom's raspberry jam. i have been nauseated, and tired. but, nothing overwhelming. i've had dry heaves but no actual throwing up yet, thank heavens. i currently weigh about 122 pounds and am 5"3. we shall see how that changes within the next few months.

luckily, we are both relieved that it wasn't our decision, ever since we first got married we have been stressed about how we will know when to start trying, or knowing if we are ready or not. but, this way, although our "agency" is not really a factor, we are relieved that we know this is gods will. we know that even though this is a shock, and that it is unexpected it is the right thing. and we are finally, after the shock is wearing out, we are now getting excited and love each other and this little pumpkin seed all the more every minute of every day