My baby is a BabyWise baby

a few months into my pregnancy i did this post basically saying that i thought i would try and raise my child with the principles taught in the babywise series. {the most defining characteristics of this series are: letting your child self soothe themselves to sleep or cry it out before bed, and having a eat, wake, sleep cycle instead of the usual eat, sleep, wake cycle}well. i'm so glad for the recommendations to this program because it has saved my life. or better: let me keep the old life i had. for garrison and i, the transition from couple to family has not been that drastic or different. want to know what bayli is like on a daily basis? here ya go:
Sleeping:
when she was first born she ate every 3 hours on the dot. but, at night she would eat every 4 hours.
at one month old she started sleeping 6 hours through the night (from midnight to 6:00)
at two months old she started sleeping 9-10 hours through the night. (from 10:00 or 11:00 to 8:00)
she is currently 2 1/2 months old and is still sleeping 9-10 hours.
we double swaddle her at night {swaddle her once in her summer swaddle to keep her arms down, and then swaddle her again in just any blanket to keep her warm}give her some tummy drops and lay her flat on her back without a pacifier. she will occasionally grunt and kinda whimper/cry for 7 minutes or less, but i have never had to let her "cry it out."
during her naps we don't swaddle her and instead lay her in her Boppy on her side with a blanket and give her a pacifier. she will sometimes wake because her binki has fallen out, but mostly she self soothes herself to sleep.
these sleep habits were started when she was first born. she has slept with us in bed a total of 3 nights. once because it was Easter and i thought it would be fun to sleep together. the other 2 were because we were just too tired and fell asleep before she got into bed.
for the first three weeks of her life, she slept in a bassinet at the foot of our bed. mostly because i was too tired to get up and walk to the nursery to feed her in the middle of the night, and also because we were paranoid parents and wanted to make sure she was still alive and that we could hear her breathing/grunting as she slept.
a friend once asked me if Bayli liked to be swaddled because her child didn't like the swaddle blankets. i would say that getting Bayli into the blanket is usually a bit of a struggle, she likes to flail her arms and legs but, once i get her in there nice and tight it takes maybe a minute before she calms down and relaxes and then she is happy. yes. 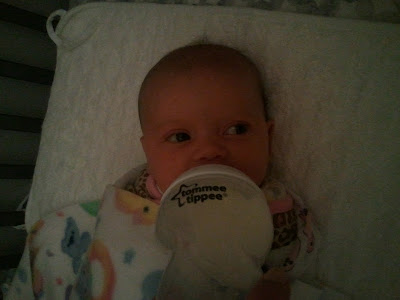 she has never even tasted formula, and without my breast pump i would have died from weeks 2 to 6 because my milk had finally come in, my pain killers had worn off, i was engorged, and she was still not latching well because her mouth was smaller than usual due to being a little early.
i say that it has been our most frustrating thing because i was not prepared for how painful and difficult it would be. once she was 6 weeks old we finally would feed without me being in tons and tons of pain. i had to use the t.v. as a distraction because it hurt so bad. it was all i could do not to rip her off and just use my breast pump instead and give her a bottle. (and sometimes that happened anyway) i'm so glad that we stuck to it because it saves us so much money, it really is a nice bonding thing for us now that we can laugh and smile through it, its so much faster than warming up a bottle, and... i truly believe shes been so healthy and growing so well because of it. needless to say, the pros outweigh the cons. and thanks to the babywise method, she eats without falling asleep and so she is getting full at each feeding. its awesome...finally.
she has not shown any signs of colic or allergies. she never spits up. literally, she has spit up once. she also burps way easily, all you have to do is prop her upright after feeding and out a huge one comes. you occasionally have to pat her back for less than a minute to get the bubble out. 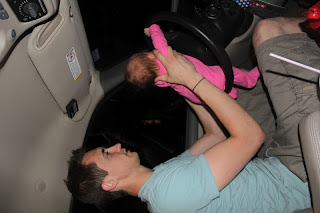 i was not prepared for how much sleeping a newborn does. for the first few weeks she was honestly awake for a total of maybe 3-4 hours in a 24 hour time period. (i'm told this may have also been because she was so small and early.) but...  now, she will be awake for about an hour and a half or more between each feeding. so that means a total of about 9 hours of awake time through the day. when she's awake she mostly just looks around. she isn't playing with stuff. she will follow an object (a toy, or a face) with her eyes, but mostly she's just making noises, silly faces, squirming and filling up her diaper. as of lately her new favorite thing is playing with her binki. she doesn't like to suck on it when shes awake, but instead just likes the feeling of it tickiling her lips and mouth. everytime we do this she smiles and it's obvious she wants more. so cute! i'm excited for when she can reach for things and grab them so that we can play with her! but in the mean time i guess her dad and i will just have to keep singing silly songs, dancing with her, practicing tummy time, putting her on top of baxter so she can ride him around the house, teaching her to drive the car, and other weird "play" things.

that's our little girl. this first three months with her have been awesome. we truly feel so blessed and lucky to be her parents. she is such a good little baby. i'm preparing myself for her to be an absolute terror when she grows up because it's just not possible for her to be this perfect forever.... 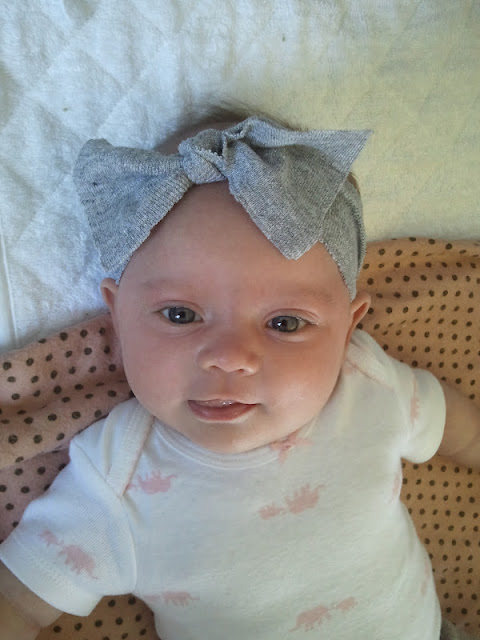 p.s. she really isn't perfect, the things that have been "bad" about her is that she has clogged tear ducts in both eyes so she gets green goopies in her eyes and is tearing up constantly. also, when she was just a month old she got a bad case of diaper rash and we had to get some prescription topical medication to fix it. but... besides those, she's perfect. :P