so, my last post was a mess, i was a mess. but... all of that craziness is over with. (we even ended up having my grandpa's funeral in the middle of it as well) but, the break that i took from blogging was mostly because i didn't have my computer while we were living in my parents basement, and because i just wanted to figure out what i wanted this blog to be, and honestly who i was as a person as well during that time. well, not only have we settled into our new house quite nicely but we have also settled into "ourselves" too. overall it's just sooooo nice to get all of our things -and our sanity- back under one roof.

When i left you last we were just about to enter wedding season and just about to close on our house. well, all of the weddings worked out nicely, and beautifully. we closed on our house. basically, everything went as planned. it was crazy, and we were stressed, but, we had planned for that too.

the day after we closed on the house, we did a walk through, and got the keys and instantly turned right around to go up to Idaho for my grandpa's funeral. after his funeral, when we got back to town we started right into working on the house and we haven't stopped working on it. we started moving in 3 days ago and today i unpacked the last box. (my sore arms are cheering inside!) 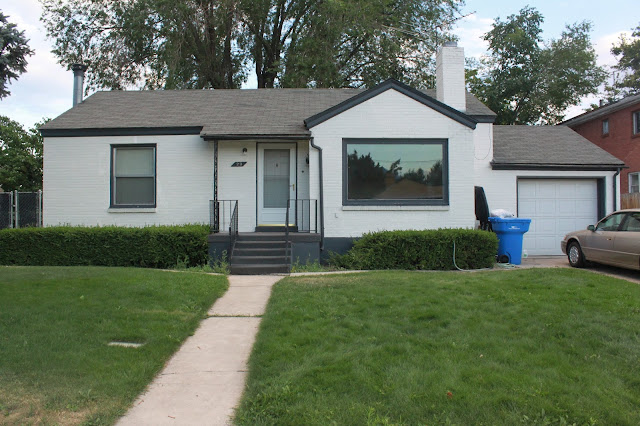 initially we had planned on moving in the day after closing, leaving everything "as is" besides some paint on a few walls just to make it feel like "ours" instead of like our stuff in the previous owners house... you know? well, when we did the walk through we realized that the floors were not in as good of condition as we had thought because we never saw the house empty, and the previous owners rugs and furniture were blocking most of the bad parts on the floor. so... it was decided to do the floors now, when the house was already empty instead of moving all of our stuff in, just to turn around and move it alllll back out again when we got around to doing the floors (because every room in the house has the same hardwood floor) well... one thing led to another and we just realized that it would be easier and faster and all around better to just do the entire house remodel at once. and... to save some money (since that was the main reason why we were going to wait to do the remodels) we did ALL of the work ourselves. and, we are assuming that the entire remodel only ended up costing us $3,000 including the new appliances! crazy right! we love it!!! so.... without making this post even longer... here are our before and afters with a list at the end of this post of all the things we have changed about the house, and what we still plan on doing with it! 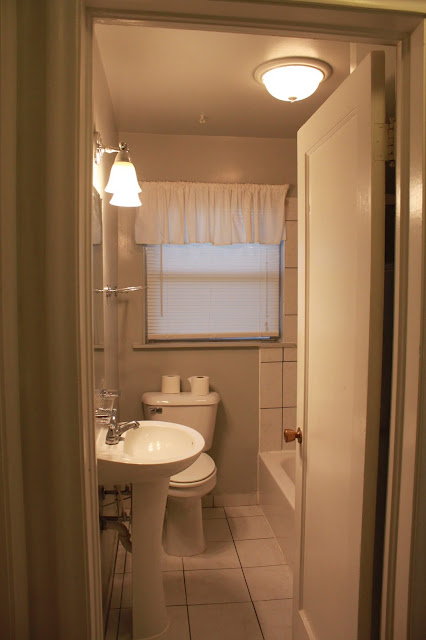 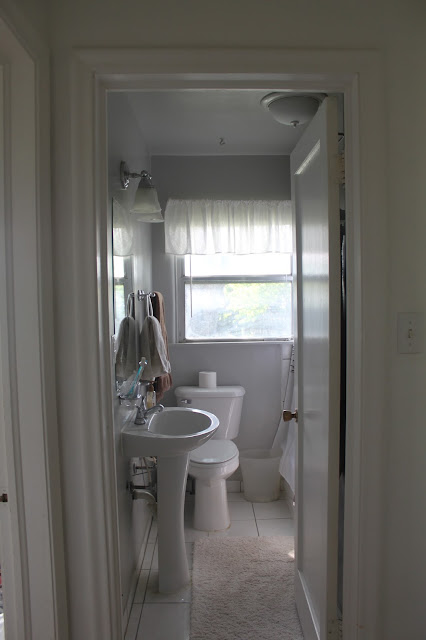 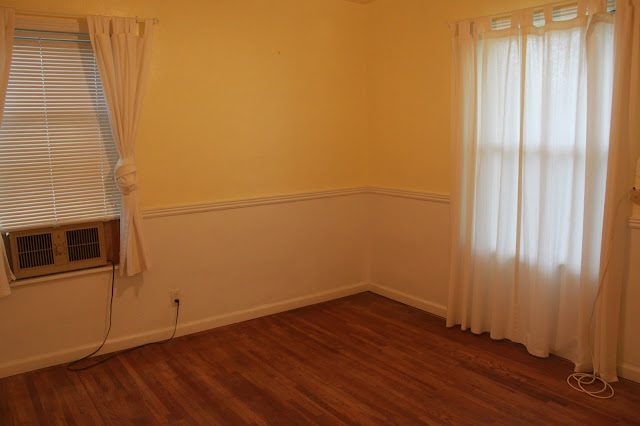 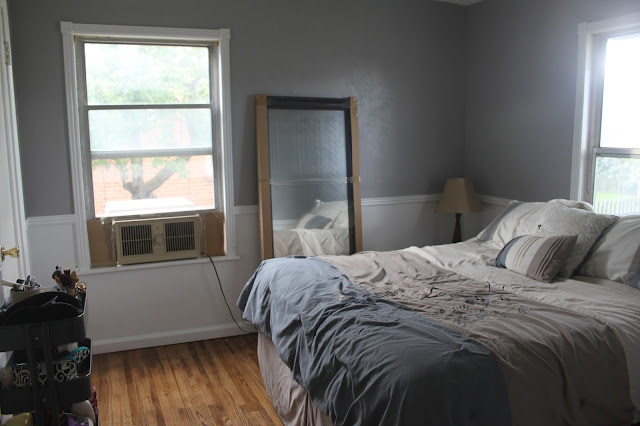 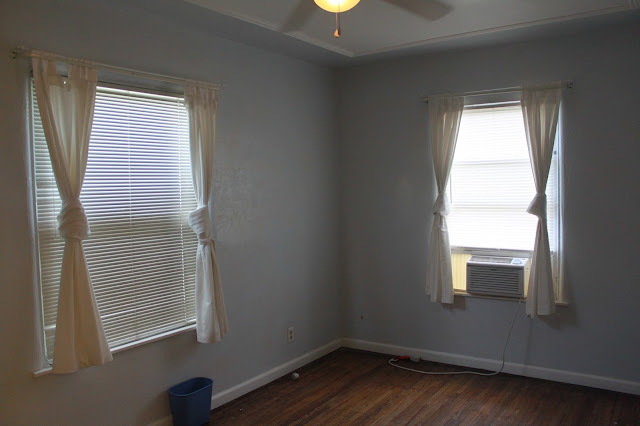 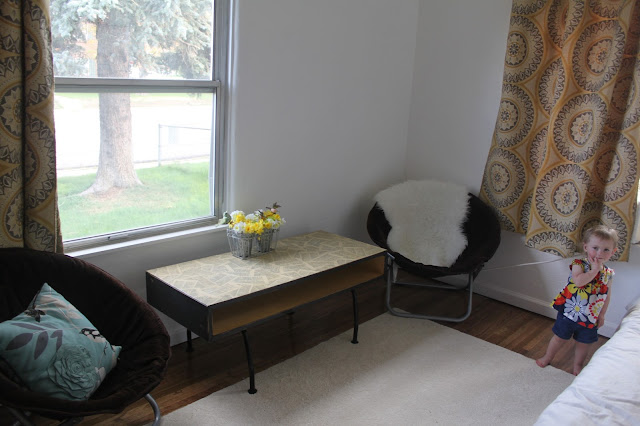 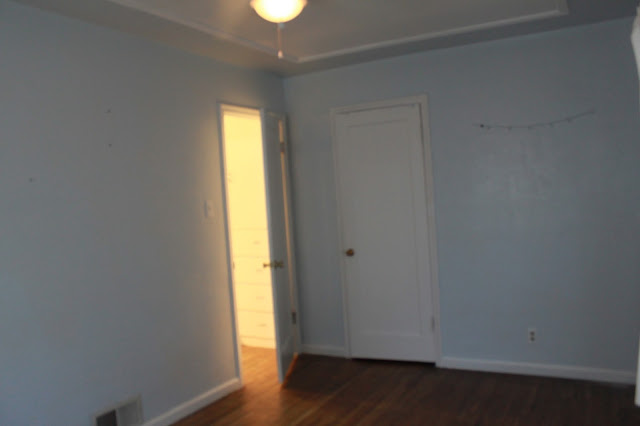 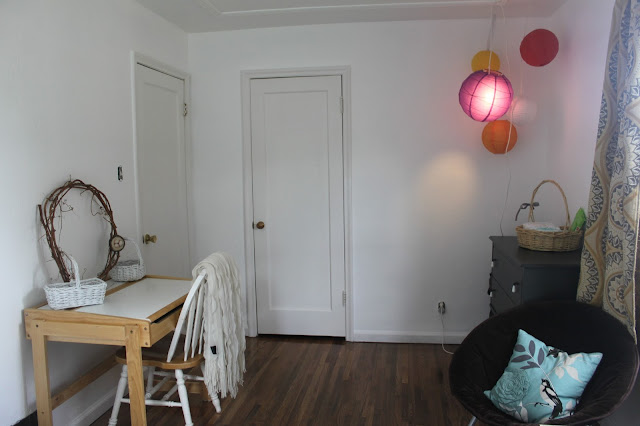 View from the front door 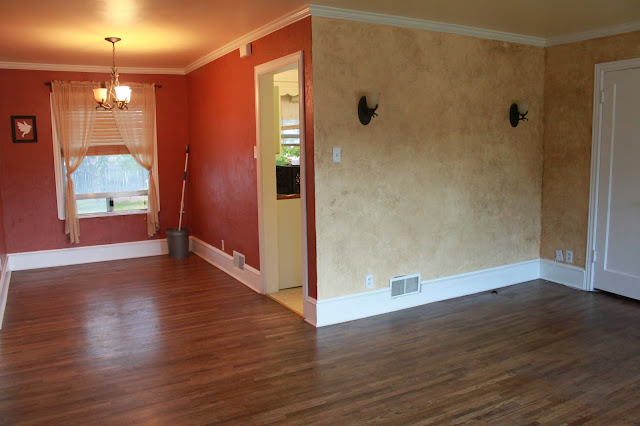 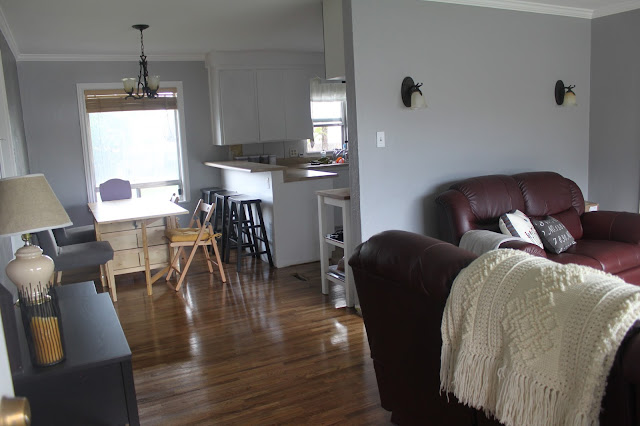 View of the front door 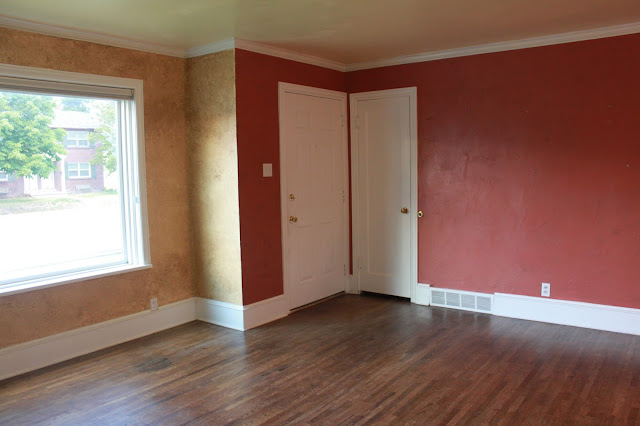 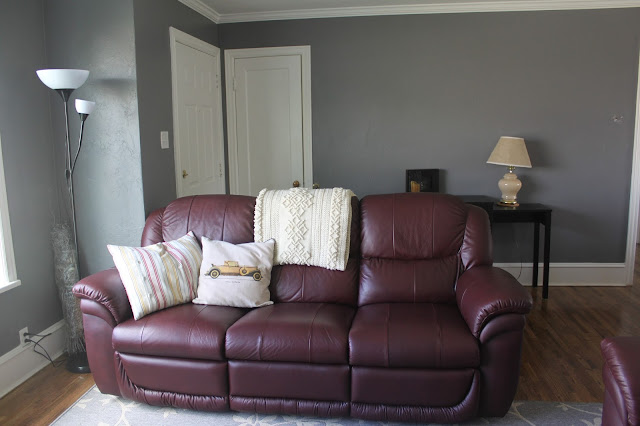 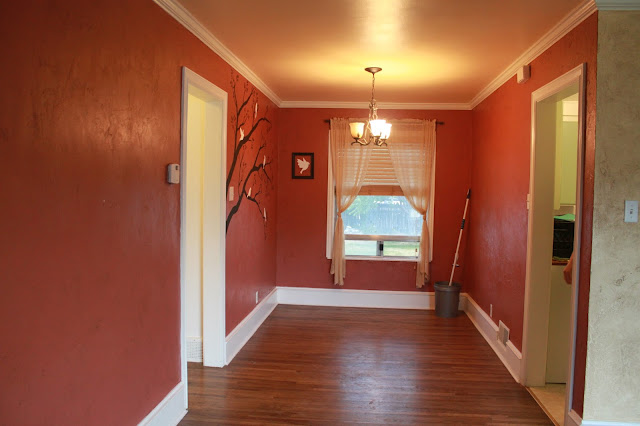 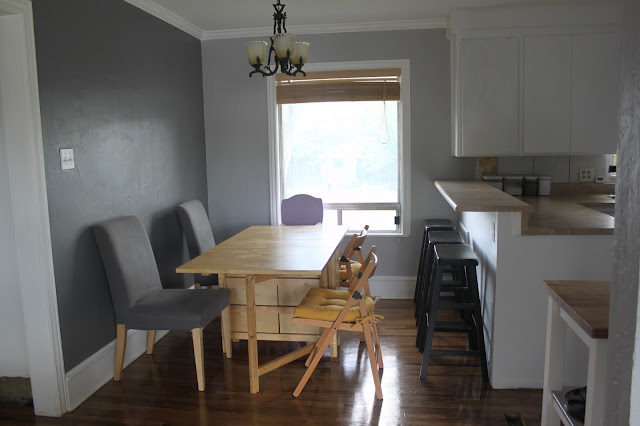 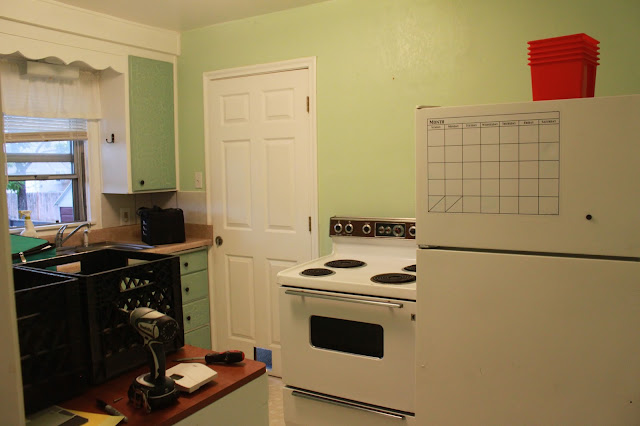 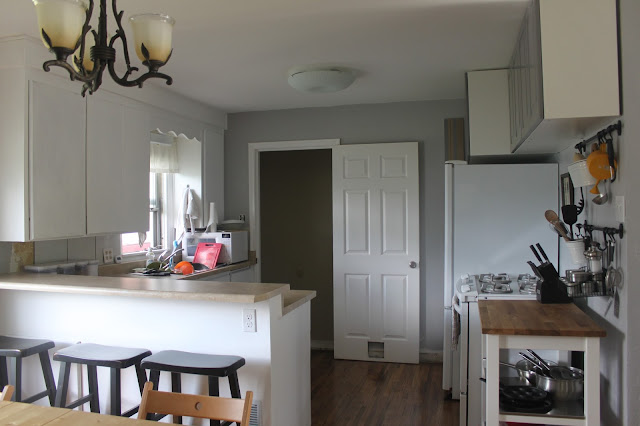 ^^pardon the dirty dishes, we are going to use those tonight when we install the dishwasher to make sure it's working properly. 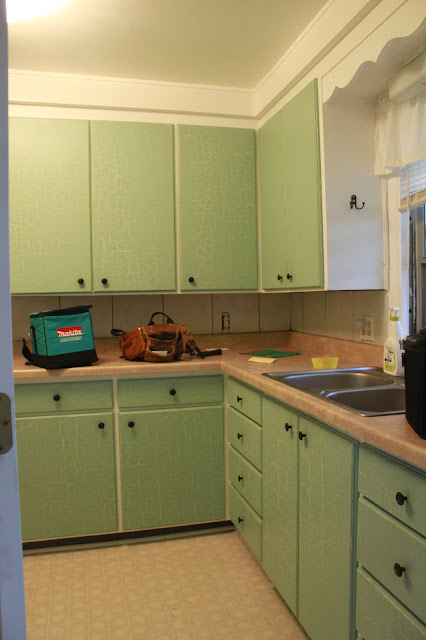 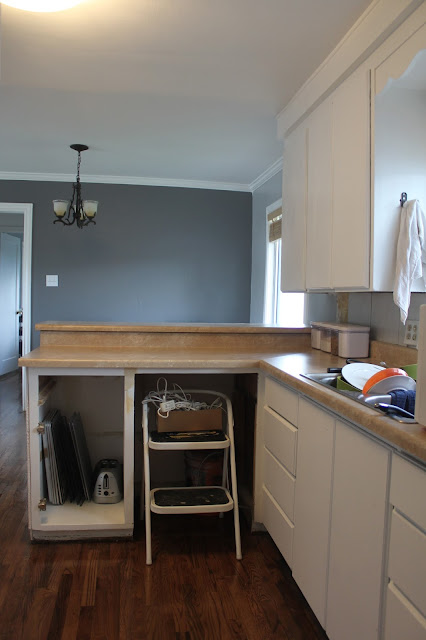 ^^that cabinet will get a door asap and the step stool is where the dishwasher is being installed tonight! 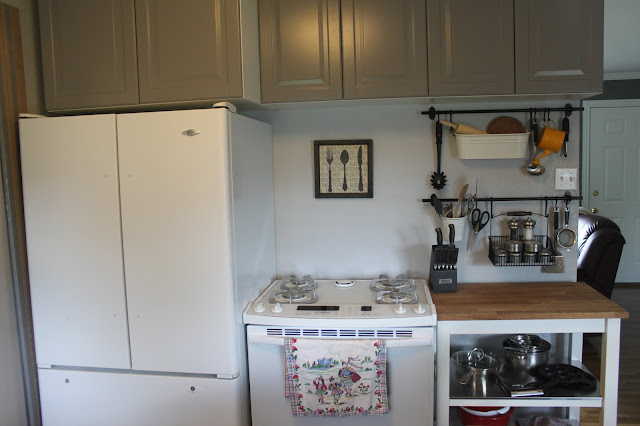 ^^is a view you never would have gotten in the last layout because of the doorway and appliances in the way.

Hallway (there is no before because... well, nothing besides the floor has changed here so i didn't take a before) 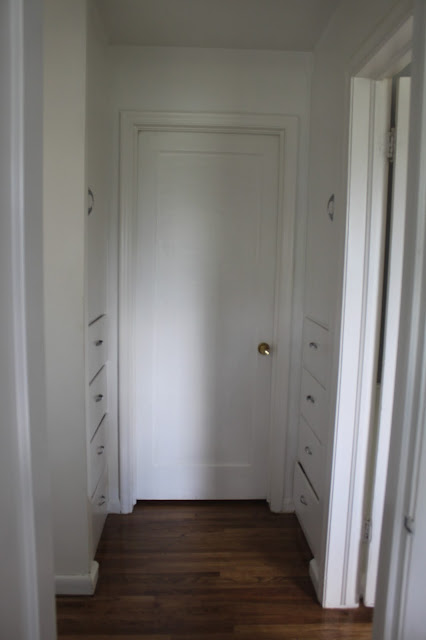 What we have already done with the house in the last two months:
-taken the wall down between the dining room and the kitchen, which also included supporting the trusses in the attic to counter the weight that previously was being held up by the wall.
-patched the ceiling
-created a bar on top of the already existing counter tops
-ripped out the previous two layers of lenoium that were on top of the hardwood floors in the kitchen
-patched the hardwood floors (this we hired out to family)
-sanded, stained, buffed, and sealed all of the hardwood floors
-painted the walls in every room besides the hallway and the bathroom. (we took the walls from every color in the rainbow besides purple to... like 10 different shades of gray)
-painted the ceiling in the new great room and the master bedroom
-painted the house's crown moldings and baseboards
-added onto the already existing cabinets in the kitchen (the white ones)
-installed Ikea cabinets on the opposite wall (the gray ones)
-changed out most of the outlets so that they now have a ground instead of just two prongs
-re-wired the oven from electric to gas (this we hired out to friends)
-running water and disposal lines for a dishwasher as well as cutting a space in the existing cabinets for the dishwasher to sit
-stripped the kitchen cabinets of their teal "crackled" finish with paint stripper
-painted the cabinets white
-fixed electrical issues
-created 2 new air ducts
-installed new light fixture by front door
-added an extra outlet outside
-installed new appliances

things we still want to do with the house:
-put some of the missing baseboard/crown moldings back up (we are doing this tonight)
-finish installing the dishwasher (we are doing this tonight as well)
-put one final coat on the cabinet doors and put back on the black knobs
-build two bench seats, one under the large window in the living room, and the other against the wall in the dining room.
-house numbers on the front of house
-put in central air instead of window units
-replace carpet on the downstairs and hallway
-hang things on walls and decorate
-build a dining room table
-set up t.v. and surround sound
-patio/bbq area outside which will include a fireplace, firepit, overhead lights, and dining furniture
-remove dead limbs from huge tree in backyard
-paint the front door mustard yellow
-new light fixtures in the dining room and living room
-make vent for the duct that is currently a hole in our kitchen entryway floor
-backsplashes on both kitchen walls (subway tile and octagon tile with dark grout.)
-change large closet in living room into a hidden sewing room
-sheet rock the laundry room
-put up window curtains