Garrison and I, like usual, talk about some pretty interesting stuff before we go to bed. like, the great wall of china for example. the wall is not very wide, it's just really long. so... If astronauts really could see the great wall of china from outer space, then wouldn't that also mean that they could see things as small as I-15, or any interstate highway?? this spurred a real question. so, about .1 seconds later after only one google search, i came to realize all these things that our teachers have been teaching us and referencing during their lessons is a complete urban myth! you try googling images of the great wall of china from outer space.... here is what you get. 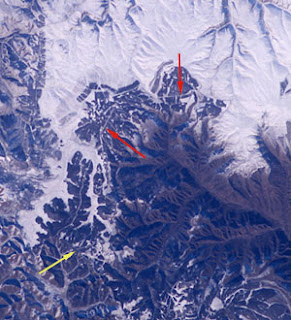 it's not from outer space! that's a zoomed in google maps picture! with arrows no less!!!

this same website that i got that image from also goes on to say that the first chinese astronaut to go into outer space in 2003 even said so himself that he couldn't see it! -so much for chinese pride, i'd have lied if they asked me about my own beloved kennecott copper mine.- anyway, the kennecott copper mine website says that they are "one of two man made things that you can see from outer space, the other being the great wall of china" so, that means they didn't do their research either, which makes me doubt the mine's validity of their claim also.

some other urban myth's we've detected as of late,
-razors in candy. never happened. just enjoy your stupid candy. stop sending it to the hospital to be x-rayed, and really, if some homemakey mother wants to make a billion homemade taffy's. let her. you really think she would purposefully poison or drug all those kids? it wouldn't be that hard of a case to crack if she did.
-mormon's aren't christians. this may not be an urban myth, but it certainly isn't true. WE ARE!!! and im soooooo sick of that baptist preacher viewed here and here saying we aren't. i really want to punch him, but that wouldn't be very christian of me. hehe.
-kidney's stolen while you were drugged and you waking up in a bath tub full of ice. never happened either. cool story. it makes for some funny you tube video endings, ie: candy mountain w/charlie the unicorn. but, nope, that's just some weird kid's sense of humor.
-you only use ten percent of your brain. huh??? when did we decide to believe this. it's about as true as the statement "95% of all statistics are made up on the spot" but we all laugh at the second one, and instead write movies about the prior ie: limitless.

what other urban myth's have you realized lately? please tell me that im not the only one that thinks of things like this before bed. :)