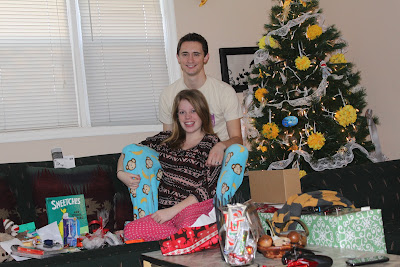 Awkward:
-the fact that basically none of my dad's presents worked. his knife, broken. his helicopter, something wrong with the wiring. his model car kit, wrong colors of paint.
-our present to mom: a block of wood.  literally. that's kinda like giving someone coal right?
-stefani's face while she zones on her ipad
-garen deciding it would be a good idea to fly his new helicopter outside at night. add in a few dogs barking at the UFO and fireworks, literally. and you get one very lost helicopter down on the ground about a block away.
-this quote said by me. "the baby is literally stealing my brain! i need to eat more omega...???" my husband had to fill in the rest of that sentence for me. THREE! (i almost said five. omega five?)
-still not knowing what is going on with "the johnson's" and their almost-probably-maybe-might move.

Awesome:
-seeing my husbands face when he got his huge miter saw for christmas. big surprise people.
-my family's reaction when they found out the gender of our little kicker!!!
-the rocking chair.
-i woke up too early on christmas morning. my husband knew this just would not work. so he put me back to sleep in the best way possible.
-seeing little kids faces while they open presents. it makes me so much more excited to have kids of my own. i won't have to borrow garen and debbie's kids in order to get my fill anymore!
-church. only one hour, and filled with singing.
-modern family. "lol, laugh out loud. wtf, why the face" -Phil Dunphy
-my childhood dog Baxter being allowed back in the house for christmas.
-the pajama pants i sewed for garrison on christmas eve.

Email ThisBlogThis!Share to TwitterShare to FacebookShare to Pinterest
Labels: Holiday