yep. it's been a full year since we got married.
holy moly.

at dinner garrison and i were talking about our favorite moments of the past year and we came up with just a few in no particular order:
going to the dollar movies with our stuffed animal "Ollie" in our pj's and blankets.
the morning we found out we were pregnant
our many vacations including greece and multiple camping experiences
waking up super early the first week home from greece, due to jet lag, and actually loving it.
and many more.

our favorite "funny moment" of the year was when we were driving on just a normal day, the car in front of us had a huge bumper sticker that said "TOP DAWG" it was lame. so, i said in my ghetto black lady voice "Shoot! you ain't top dawg, i'm top dawg... you can be top cat! pussy." we laughed all the way home. i'm pretty sure garrison thought i should have my own tv show on comedy central with that one. :)

for our anniversary garrison took me back to salt lake city, the same place we got married. but before we left, we decided we had to participate in the age old tradition of eating year old cake! thawed and saran wrap removed, and a bit nervous we dove in. delish! we were worried about having to throw it away because of freezer burn or just because it would taste horrible after sitting in the freezer for so long but... nope! now we just have to worry about who gets the last bite! 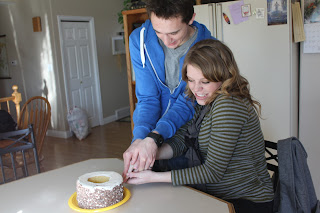 we stayed in "the avenue's b&b" it was the cutest little house and the hospitality was awesome. i will have to do an entire post on our experiences there later because... oh man. they are funny and might include a very awkward middle of the night fire alarm experience and way cool dog named buddy.
we went to p.f. changs china bistro for dinner (because we went there on our honeymoon) unlike on our honeymoon, they actually charged us for dinner this time, but it was worth it. sooo good!

we also went for a walk in the salt lake cemetery and looked at names and found most of the old prophets headstones. it was an awesome experience and the best way to have scripture study in the mornings. 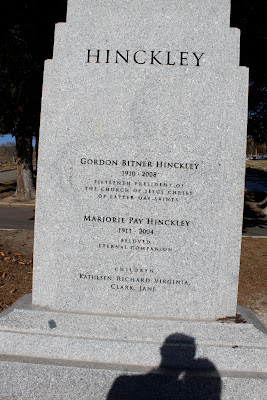 we of course went shopping (mostly for our little kickers) to many places including Ikea, H&M, Camping World, Euro Treasures Antiques, and the good ol' D.I. :)

we really cannot believe it's been a year. it has been so much fun. of course there have been a fair ammount of surprises, but it's those same surprises that made the year as wonderful as it was. it's not the picture perfect friday night dates that we remember and cherish most, it's not the days where everything was in it's place and things went smoothly. it's the bumps in the road that threw us for loops, the late night discussions/arguments that brought us closer, the nights when we went over our budget twice or three times in order to figure out the very best way to save the most amount of money, it's all those things that we remember and that strengthened our marriage, and that made us better individuals. if we wanted perfect little date nights, then we'd still be dating. but we're not. we are married. and we get the wonderful things that come along with that. :)