jr. high is a hard time i think for everybody.
especially if you're an overweight grape... literally.

for 8th grade we were able to have a halloween dance. for some crazy reason i got in my head that dressing up like the fruit of the loom guys would be the coolest thing ever. 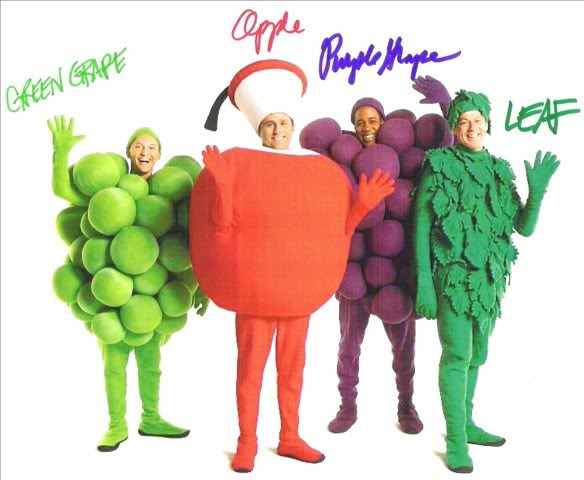 i was stupid i know.

i already had purple leggings and jacket so... i was the purple grape.
i decided to use balloons and safety pin them all over my leggings and jacket. i also put my hair on top of my head and made it look like my "stem". oh and don't forget the purple eyeshadow i had my mom put on my face so that my face looked like a grape.
did i mention that i was also about 30 pounds overweight at this age.
...it's sounding like a great idea right???          wrong. but i didn't. i didn't get the memo that your supposed to look sexy and pretty and that dress up's don't mean "look like the ugly/stupid/crazy character" unless your a guy. if your a girl you are only supposed use the Madonna or Britney Spears concerts as a reference guide. is this story reminding anyone else about that scene from mean girls?
anyway. i dressed up as a grape.

sometime during that dance one of my balloons fell off, that also meant that one of my safety pins came off. well, one lucky fella figured this out and all of a sudden i became the coolest thing at that dance. everybody was trying to pop my balloons. for some people that meant they found safety pins and pricked me, for others that meant smushing me between two people like in a mosh pit, and for others that simply meant ripping the balloons off me. seriously i felt so cool. (this proves how naive my 15 year old brain was) i instantly turned from the girl dancing in the corner with one or two friends to being in the center of the dance with maybe one or two balloons left and my fat purple face.
the best imagery i can come up with for how pathetic i was is this: imagine popped, deflated balloons, hanging off my leotard tight purple leggings and jacket like raisins. then add the smile to my round purple face as i'm enjoying it all like it's the best day of my life. epic.
at some point after the ringing in my ears subsided, the cool people in the front of the dance rejected me and i got shoved back into my own little corner. i suddenly realized that i was not only encouraging but actually enjoying the fact that half the school was just making fun of me. i turned, left the dance, and walked home crying. (seriously, what a sad sight for those who passed me in their cars!)
i am the girl i am today because of that story. i know it sounds crazy but i learned who my real friends were, i developed a sense of humor and i think that was the day that my thick skin started to grow. now i still use that story when people ask me what my most embarrassing moment was because honestly i look back at it with fondness and no matter what, i always get a good laugh. (even from myself)

on a good note, two years later i found out that i had a thyroid disorder and lost 30 pounds in one summer. those same boys who were popping my balloons later had crushes on me and i wouldn't give them the time of day.

because it's the first week of school. i wish all you children good luck! you'll need it!