fly on the wall 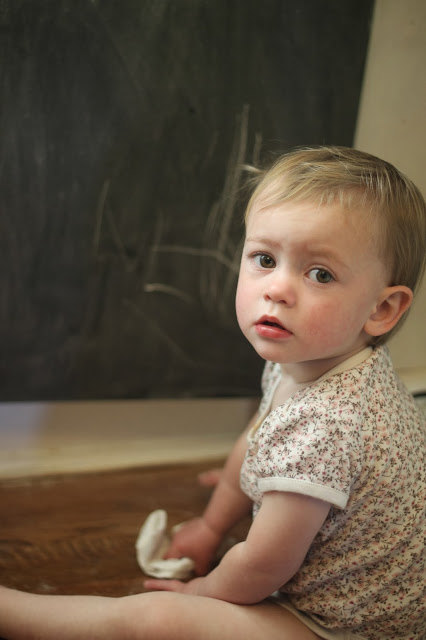 Bayli and i were having one of those moments, after her dinner hadn't been eaten, and she sat on the toilet for what seemed like hours with nothing happening, and then instantly went to the bathroom as soon as her diaper was back on, and after time out happened 3 times in a row. you know. she was tired, and i was done.

so, i decided to lock us in her bedroom together, i crawled in her toddler bed and just layed there, under the covers, with only the top of my nose and eyes peeking out. mostly because i wanted to escape my own frustration, but it turned out i really enjoyed being a fly on her wall.

watching her come up with her own imaginary obstacle course, going from flopping herself into her chair, to standing on it and yelling at the top of her lungs "NOO!!" while pointing at Baxter the dog (i wonder who she learned that from) then getting down off the chair, running/dancing her way to the coloring book that was face down on the floor on the other side of the room, standing on top of it then gathering all her strength to jump off of it an entire inch. giving herself some applause with a "yaaay" and then starting it all over again. she repeated this cycle probably 8 times before she realized that mom was watching. then she did it a few more times, and in between each obstacle she would pause to look at me to see if i was still watching her.

after that got boring she moved on to the book we read her for bed every night. pointing at all the animals and saying their correct sounds, and trying to say the other things in the book she recognized like "eyes" and "swing" and "snail" and "cloud" and "bird" and "tree" all on her own.

i went from wanting to climb under the covers to protect both of us from how frustrated i was at the entire situation, to wanting to squeeze her until her eyes popped out because of how much i loved and adored her. it's crazy how that is the norm around this house. she can be totally infuriating one moment and then the sweetest thing in the world the next.
...im just grateful that the infuriating moments come less frequently of the two.