i spy with my little eye, something black and white, squirmy, cute as a button, tiny, healthy, perfect, and all ours. have you guessed yet?? well, let me tell you. it's our little baby!

"they just grow up so fast"
i think it's so cliche that all moms say this. ALL moms. it's funny. well... i'm officially saying it.
HOLY COW only 2ish months ago this little thing's entire body and my entire uterus fit on one screen with room to spare. now, the entire screen is filled with just it's head! 10 weeks! that's all it took for all this growth to happen. sheish.

the ultrasound went perfectly. the technician was AWESOME. super talkative and explained everything, got excited with us when we saw it's tini little feet and hands and the coolest part: probably watching it's heart beat. so cool. she said "this is so awesome, you'll never experience this again, watching your child's heart beat." seeing all four chambers move blood in and out so fast, pumping as hard as it can. and that little heart is just the size of my pinkie fingernail. maybe smaller. woah.

we have decided to wait to find out the gender until the middle of january because we will be having a gender reveal baby shower for all my family and close friends. because of this, we had the technician put the big secret in a sealed envelope with pictures as proof that we will be able to look at after the reveal. the technician did say that she was "100% positive the sex was accurate". that it was "obvious" and that we were "crazy" to wait this long. haha. but, garrison and i are just excited to wait and find out later. today was wonderful and put us both in an amazing mood, now, we get to spread the joy out a few more days.

the other thing the technician said was that our baby had nice full lips. she took this picture just to prove it. 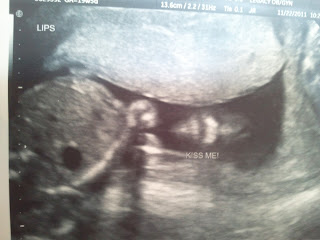 the text says "lips" and "kiss me!" because look at those suckers! this shot is looking straight down at the baby with top of its head on the right and it's torso on the left.  you can also see it's two nostrils and little balled up hand and that big black hole is an organ. it's pretty squished in there.

we got a total of 17 pictures! lots to stare at for hours and hours. here are just a few more shots.
it also now weighs 11 oz. almost a whole pound!

in conclusion: the doctor said "for halfway along, you and baby are just exactly where we would hope you would be, so far there seems to be nothing wrong and nothing to worry about. keep doing what your doing and we'll see you in 4 weeks." best news ever. i love being told by the doctor that nothing is wrong. especially after all of the research i've been doing and stories i've heard about all the things that could go wrong. garrison I and this little baby are very very lucky and have so much to be thankful for during this thanksgiving season.